Blend the first four ingredients in a blender on medium- high. Add the softened butter and coconut. Blend 30 seconds more. Pour into 2 greased pie plates and sprinkle with ground nutmeg.  Bake at 350 degrees for 35-40 minutes or until middle is set up. Let cool and enjoy! 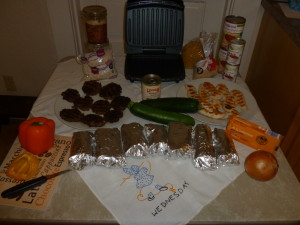 So does anyone else ever come home from work and look in the refrigerator for something to fix for dinner and either nothing looks good to eat or you have the thought… “There’s nothing in here to eat!” ?

I am sure we all have done that. Sometimes I wait a while, then open the refrigerator door to see if anything has suddenly appeared that looks delectable… but nope… nothing changed! Sigh!!

We live in such a fast paced world, the fast food industry makes it too easy to swing by and pick up a meal. You will save money by having meals made ahead in the freezer, plus you will have more nutritional value in the meals!

Today (on Tuesday) I decided to do something about that and made some food for the freezer. I had a long list of food ideas to fix and was very surprised how quickly I got all but a few things completed! Here are some ideas for you to fix for the freezer and have an instant healthy meal prepared that will only need heated or baked but could also assist with completing a meal!

I accomplished the crossed out items and froze them. I also made 2 Crustless Coconut Pies, made one recipe of Homemade Ketchup and 2 recipes of Homemade BBQ Sauce! 😀 When I got up, I put the chicken breasts in the crockpot with some water and turned on high. Then using a Indoor Grill (like a George Foreman), I grilled the chicken and hamburgers. (I had thawed the ground beef the day before, then formed into patties today). Third, I started frying the onions, peppers and chicken sausage for the breakfast burritoes as the grilling was almost completed. After I made the Ketchup and BBQ sauce, I finished pulling the chicken and mixed with BBQ sauce. Then, using the chicken broth left behind in the crockpot, I poured in the beef & barley soup ingredients and turned it on high. I mixed up the Cheesy Pasta Bake last and then made the coconut pies ( I will share the recipe next week)

. SO hard to stop nibbling on it… just has a hint of sweetness and yummy coconut flavor!

Today was an extra profitable and prosperous day… not my typical day in the kitchen.. but I am excited to have some go-to meals now!

A tip I strongly suggest- have hot dish water in the sink and wash dishes as you go to avoid a huge mess later. I don’t have a lot of extra dishes and kitchen utensils, so this actually really helps me to keep my dishes washed to use on the next recipe!

Another tip you could (and should) consider if you don’t have the time, energy or if you have little children to take care of- consider hiring Coach Shannon to make freezer food for you! I can provide my own recipes, or you can give me your recipes and I can make them. 😀 Email me at mannafoldblessings@gmail.com for pricing and times we can get together to discuss what works best for both our schedules.

I also have meals already in the freezer, so if you just want to try a dish, ask me what I already have available to sell.

I look forward to hearing from you! Feel free to forward this email to your friends who may benefit from some prepared healthy meals.

Have you ever read the fine print on a bottle of supplements and in the “inactive ingredient list, you see “silicon dioxide” listed?

I am not an expert on the subject by any means, but after researching it briefly, I have concluded I don’t want to be eating ground up mineral rocks! Yes, that is what silicon dioxide is! Silica is found in 90% of the Earth’s foundation of rocks and sand. It is found in 3 ways of crystalline, amorphous and synthetic amorphous. 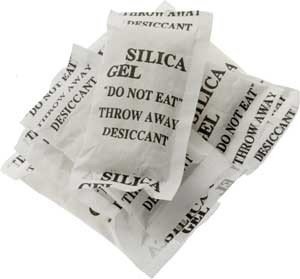 Crystalline silica is most frequently found in a form of rock called quartz. For those of you who are archaeologists, these terms are more familiar to you! Websters Dictionary quotes “quartz- a mineral consisting of silicon dioxide occurring in colorless and transparent or colored hexagonal crystals or crystalline masses”. (2) It is put in the white packets commonly found in pill bottles with the words “DO NOT EAT, THROW AWAY” on it. While these crystals have the capability to absorb moisture so the pills won’t get soft in the bottle, I am scratching my head trying to figure out why they say “DO NOT EAT”, yet put it in the pill or powder itself under the name silicon dioxide…???!!! :/

Amorphous minerals have no definite shape or form as a crystal. (2) Syntetic amorphous silica (SAS) is a man-made filler that is used in rubber, tires, shoes soles, human and animal nutrition, oral toothpaste, cosmetics, paper, and paint to name a few! (3) The article goes on to say, and I quote “SAS should not be confused with crystalline silica which has significant adverse health effects due to its specific structure. ” (3)

Silicon Dioxide is used as a “filler” product to prevent the machines from getting clogged up as the pills are made or the capsules are filled. Not only is it  used as a anti-caking agent, but it can be used as a pesticide (due to the pill ingredients having exposure to agriculture, food handling and food prep) and as a “carrier” in regards to flavors or fragrances of food.

While I am only barely scratching the surface of this subject, I offer it to you as a strong suggestion to look at what you are putting into your mouth! This is not a scare tactic, but there is real food available in pill form that is void of silicon dioxide. If you would like to know more about these, please send me an email at mannafoldblessings@gmail.com.

Have a wonderful day! ~Coach Shannon

1 bag of mixed vegetables (can be any stir-fry blend)

Put the oil in a large skillet and add the chopped onion. Saute till onions are slightly limp, then add bag of vegetables. Add the dill weed and garlic salt. Stir often making sure the vegetables cook till tender crisp. Add the chicken and chopped fresh cilantro and parsley (as little or as much as you want). Stir enough to make sure chicken is heated through. Vegetables should be tender crisp.

Serve on a bed of brown rice or just eat as is. Enjoy!